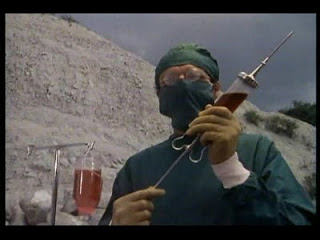 I wore shoes for 4 hours in December. I can’t remember the last time I took a shower without involving duct-tape. All because of a lousy staph infection.

But wait. I digress. Let me take a giant, lurching step backwards. Back to January of last year. Whilst wearing fancy, leather dress shoes, I took a step off a loading dock and into a parking lot. This was not an accident. I was merely taking a shortcut out of a client’s plant.

When I landed, I crushed a nerve in my foot. I wasn’t aware of it at the time. The only thoughts in my mind were
1) My foot just exploded
2) My client is still watching me walk away
3) I will try not to curl up in Mr. Client’s parking lot and scream like a little girl.

Fast forward about 6 weeks. My wife was sick of me limping around the house like Quasimodo and demanded that I seek medical attention.

The doctor took a quick look at my foot and diagnosed it as a “Morton’s neuroma.” This must be Latin for “watch me stab you with a giant needle” because that’s exactly what he did. He fucking stuck a fucking needle into my fucking foot RIGHT where it hurt the fucking most. He stuck it through the back of my foot, in between my toe knuckles, and directly into the nerve. He then repeated the process twice more!!

So there I was flopping around on the gurney like a beached carp, and Doctor Pain has the audacity to say, “Come back if that doesn’t help.” News flash, Needle-Boy – it didn’t help.

I saw him again. Then I saw a specialist. Then another specialist. And yet another specialist. All of these people insisted in driving needles full of cortisone through the back of my foot and into my nerve. (Actually, one guy started between my toes and shoved the needle in that way, but the end result was the same.)

So FINALLY, after nearly a year of this acupuncture from Hell, an orthopedist told me that the only way I was going to get relief was to have the nerve cut out of my foot. I suspect this was due to the fact the poor nerve had been penetrated more times than Ricky Martin in a Puerto Rican prison, but I didn’t press the issue.

The surgery was to be minor. The recovery time was to be a couple of days. An incision was made in the top of my foot starting between the toes and going back a couple of inches toward my ankle. The foot bones were spread apart, and Captain Cutlery then cut down to the fat layer just above the skin on the bottom of my foot. He clipped off the offending nerve and fed it to the dog.

Two days later, I was sick. Not only did I feel diseased, I had a huge infected mess where my foot used to be. I went to the ER. They told me I had a staph infection.

I got big drugs. I went back to the Orthopedist. And do you know what he did? Do you have any idea what that sadist did.? Without warning, without medication, he REOPENED THE INCISION. The incision that went nearly all the way through my foot. Ya. THAT incision. Then (I swear I am not making this up) he packed it full of gauze.

And here I thought that the whole needle-in-the-inflamed-nerve-trick was the worst pain ever. Nuh uh. This pain beat that by a country mile.

Try this at home kids. Cut a deep hole in your foot and scrape the sides with gauze. Hurts, don’t it? Now go tell Mom that your brother did this to you. Fun, huh?!

And so began my current odyssey of pain. For about three weeks, I saw the doctor every couple of days. He’d pull the bloody, puss-filled strip of gauze out of my foot-hole and jam in another one. (Did I mention this hurt? Did I? Because it did. It goddamn hurt.)

After a while, I think the doc just got tired of looking at me. He handed me a pair of tweezers and a jar of sterile gauze, and told me repack my own festering foot-hole at home…twice a day.

And so I do. Every morning and every evening I pull out a nasty length of gauze from my foot. Then I push in a fresh one. Its like that game Operation. Remember the one? You’d take out the funny-bone. But if you bumped the sides of the “patient,” his nose would light up. It do the same thing, except I also swear a lot. A couple of times, I’ve even managed to puke too. Fun for the whole family.

Self-treatment has been a learning experience. I’ve learned that I can hurt myself bad enough to actually barf. I learned that bones are actually kind of slippery. And most important of all, I learned to never ever ever, no matter what, let isopropyl alcohol touch exposed nerves.

Oh ya, the duct tape thing – I can’t get the hole wet. So I either tape a plastic bag around my foot, or just wrap the whole thing in duct tape. That stuff works for EVERYTHING.