Efen posted a video last week that really brought a smile to my face. Most of you probably read it over at his place, but for those that didn’t, I will post it here. I had never heard of the Acapella group “Straight…No Chaser” before, but I will keep my eyes and ears open for more of them.

Laura was nice enough to bestow me with an award. I think the image speaks for itself. 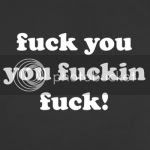 She had originally read a post titled “You Know Who I Hate?” and like it so much, that she came back for more. I guess that is why I got this fuckin’ award. I don’t know if it’s a good thing, or a bad thing.

Seeing as I don’t want to be alone, I will also pass this award on to Canucklehead because I like that fucker, and I think that we are somehow related. Our live are uncannily similar, and he is just as ugly as I am.

Garrick (I can’t link to his blog because he still doesn’t fucking have one!) should be somewhere back in the US for a few days now. I would imagine that he and his significant other are sitting in an airport somewhere along the east coast delayed or looking for their Swiss Army luggage. He is supposed to stop by Tuesday, the 23rd for a while. (I’m writing this post on Monday…but it won’t publish until Wednesday, so the above comment about Garrick will be outdated by the time you read this. HUZZAH!)

I finally got around to upgrading the blog to WordPress version 2.7. I wasn’t expecting such a drastic change in the admin panel, and boy was I surprised. Everything has been moved or changed in one way or another. The wordpress update also required that I update the theme to the latest version. With this upgrade there are some new features. One that I really like is the Nested Comments feature. A commenter can now directly reply to another commenter, and those comment will nest below each other.

5 thoughts on “A Quick Couple Of Things”